While this may seem like a solution searching for a problem, for some people interacting with Twitter in a terminal window makes sense. There’s less distraction at the command line than with a desktop Twitter client or even Twitter’s web interface. On top of that, command-line clients are fast and their interfaces are generally quite clean.

No matter why you want to work with Twitter in a terminal, there are applications out there for you. Here’s a look at three Twitter clients that you can run from the command line.

Twidge is a simple but effective Twitter client. It lets you interact with your Twitter account in a number of ways, including reading and sending tweets and direct messages, replying and retweeting, and viewing a list of your own tweets. You can even tell Twidge to shorten URLs in your tweets by adding a couple of lines to its configuration file.

Twidge isn’t interactive. Every time you want to do something, you need to run Twidge with an option. For example, type twidge update “My message” to post a tweet. If you can’t remember an option, type twidge lscommands to get a list of options.

Twidge displays information in a very clean way. You get two columns, with a Twitter handle on the left and tweets or messages on the right.

Oysttyer is a Perl script that packs a number of features into its 8,000+ lines. Unlike Twidge, it’s interactive. When you fire up Oysttyer, it grabs your current timeline. Then, it waits for you to tell it what to do.

You do that by issuing one of Oysttyer’s built-in commands that gives you an impressive level of control over how you interact with Twitter. Each command has a forward slash in front of it, like /refresh , to get the latest tweets in your timeline.

The forward slash is very important. Oysttyer considers anything that you type without a forward slash in front of it to be a tweet. If you don’t include the slash with commands, you’re going to leave some of your followers scratching their heads, as I found out!

Like what? Post and reply to tweets, send direct messages, view conversations, and block or mute people. You can even attach images to, and view them in, tweets (plus a whole lot more).

You can also customize the look and feel of Rainbow Stream. It has a number of themes, which change the colors of text and links. You can even change the format of how you quote tweets when replying or retweeting.

What is Rainbow Stream

It is written in Python and built on top of Twitter API and Python Twitter Tool. To run this application in your console you must have installed python and pip version 2.7.x or 3.x.

In most of the today’s Linux distribution, python should already be installed on your system. You may check the version of Python installed as:

Next, install python-pip package using following commands as per your Linux distributions.

After successful installation you should get the below message in your terminal.

2. Now type ‘rainbowstream’ in your Linux terminal, as user.

3. Copy the PIN from HTTP web Browser into your terminal and hit return key.

It will take a few seconds and you should get your twitter_user_name in your Linux prompt.

4. To display tweet’s images directly in your Terminal, you can do:

Note: Here IN is for India. If you want to see Current Trend for US, or any other country, you may do so.

8. T see list of all your friends, people whom you are following.

Here is the list of commands you can run to handle your twitter tweets and feeds from your Linux terminal.

Twidge is a terminal client for microblogging sites such as Twitter and identi.ca.

Twidge is a full command-line client. It is designed to be useful when you’re sitting at a shell prompt. It produces output in well-formed and easily-parsed ways, and has various features for working with piped data.

There are other command line tools for twitter which are also available, but most of them are not updated for the changes in twitter security settings.
Here is how you can install and configure Twidge,

Twidge is available in the oneiric apt repositories, so if you are using Ubuntu 11.10 you just need to install Twidge using the install command.

Issue the following command in the terminal

Enter the authentication code in the terminal, and you are done and ready tweet the geek way 🙂 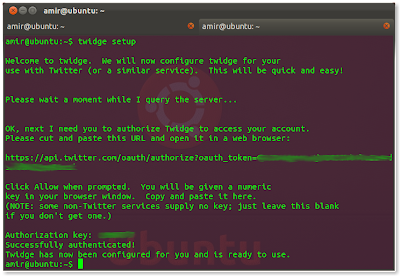 For the detailed description for the twidge commands look inside Twidge man pages.

The CLI takes syntactic cues from the Twitter SMS commands, but it offers vastly more commands and capabilities than are available via SMS.

First, make sure you have Ruby installed.

On a Mac, open /Applications/Utilities/Terminal.app and type:

If the output looks something like this, you’re in good shape:

If the output looks more like this, you need to install Ruby:

On Linux, for Debian-based systems, open a terminal and type:

or for Red Hat-based distros like Fedora and CentOS, type:

(if necessary, adapt for your package manager)

On Windows, you can install Ruby with RubyInstaller.

Once you’ve verified that Ruby is installed:

A mobile phone number must be associated with your account in order to obtain write privileges. If your carrier is not supported by Twitter and you are unable to add a number, contact Twitter using https://support.twitter.com/forms/platform, selecting the last checkbox. Some users have reported success adding their number using the mobile site, https://mobile.twitter.com/settings, which seems to bypass the carrier check at the moment.

This command will direct you to a URL where you can sign-in to Twitter, authorize the application, and then enter the returned PIN back into the terminal. If you type the PIN correctly, you should now be authorized to use t as that user. To authorize multiple accounts, simply repeat the last step, signing into Twitter as a different user.

NOTE: If you have problems authorizing multiple accounts, open a new window in your browser in incognito/private-browsing mode and repeat the t authorize steps. This is apparently due to a bug in twitter’s cookie handling.

You can see a list of all the accounts you’ve authorized by typing the command:

The output of which will be structured like this:

Note: One of your authorized accounts (specifically, the last one authorized) will be set as active. To change the active account, use the set subcommand, passing either just a username, if it’s unambiguous, or a username and consumer key pair, like this:

Account information is stored in a YAML-formatted file located at

Note: Anyone with access to this file can impersonate you on Twitter, so it’s important to keep it secure, just as you would treat your SSH private key. For this reason, the file is hidden and has the permission bits set to 0600 .

Typing t help will list all the available commands. You can type t help TASK to get help for a specific command.

Cawbird is a modern and lightweight Twitter client for the GNOME 3 desktop. It features inline image and video preview, creation of lists and favorites, filtering of tweets and full text search. Cawbird is able to manage multiple Twitter accounts.

Cawbird is a fork of Corebird, which became unsupported after Twitter disabled the streaming API. Cawbird works with the new APIs and includes a few fixes and modifications that have historically been patched in to IBBoard’s custom Corebird build on his personal Open Build Service account[1].

Due to changes in the Twitter API[2], Cawbird has the following limitations: